Turning the Zebra TC8000 scanner into a laser tag game. Sounds pretty awesome right? It sure is! During the hackathon at the Droidcon 2016 conference in London, we turned this idea into a reality. All it took was two days of programming, clever thinking, 5 developers and a lot of pizzas.  All the hard work paid off: we won the head prize at the Hackathon. Once we returned to the office, we got eager to take things to the next level. We set ourselves the ultimate goal: an actual release of the Laser Tag app in the Zebra AppGallery. And so we did! Last week, we launched the app and started a supportive movie marketing campaign. How did all of this happen in the first place? We will start our story at the Droidcon UK London and take things from there. Starting off as an “IT geek” at a hackathon and ending up as a famous Hollywood movie actor. Everything can happen in the world of a Mediaan software engineer!

It all started at Droidcon UK in London

October 2016: Jordy Langen (the guy wearing glasses) and I, both members of the Mediaan mobile app team, joined the Droidcon UK in London. Droidcon is the biggest Android developer conference in Europe. With speakers from Google itself, and other big guru’s in the scene, it’s a blast to attend. To learn the latest technologies and tricks on mobile development, Mediaan invited Jordy and me to visit this great event. As part of the Droidcon conference, they organise a 2-day hackathon. Of course, as true Android fans, we could not resist attending. As history tells us: this is where it all started.

What exactly is this TC8000 scanner?

The hackathon is sponsored by a few companies that each have their own challenge to solve. One of the sponsors that caught our attention was Zebra Technologies. They make several rugged phones, tablets and scanners, for usage in warehouse and production environments. The Zebra TC8000 scanner was subject to their hackathon challenge. It’s basically a very rugged Android device with an excellent (barcode/QR-code) scanner built-in. Next, to the built-in scanner, it also comes with a hot-swappable battery. These features made the device something we’ve never seen before, and therefore a real challenge to our programming skills.

After visiting a lot of sessions, we decided to enjoy a couple of beers in a local pub to discuss the possibilities of the scanner, in regard to the hackathon. Zebra already posted their challenge online: “Create an app for our TC8000”. That same evening, we decided to team up with 3 of our friends: Jozua Sijsling, Christian Langer and Lavong Soysavanh. Together, we came up with the most awesome idea: the Laser Tag App. Using the built-in scanner to shoot opponents using QR codes, adding sound and vibration effects, utilize the hot-swap the battery for reloading the weapon… We had it all covered!

Saturday morning and time to shine. Upon arriving at CodeNode, a cool place where events from Skillsmatter are hosted, we received more information from the sponsors on their challenges.

We decided to stick to our laser tag app idea, but to also integrate the other challenges. So, using Firebase for “real-time” synchronization between players and BluetoothTap for starting a game and item pick-ups (other guns, ammunition). So, what exactly did we had in mind? Have a look at all the features we decide to build (and eventually also managed to build): 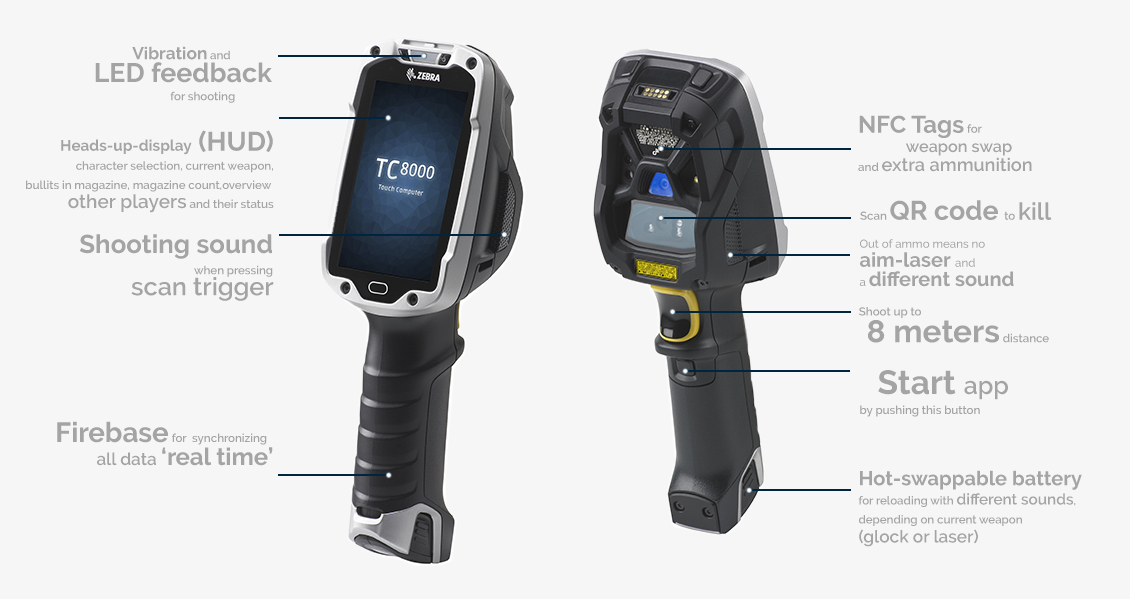 After the start signal, we had until Sunday mid-day to complete our app before presenting it to the sponsors. In this time we (again) had a couple of beers, enjoyed pizza, played table tennis, but mainly worked very hard developing our laser tag app. We used Slack for communication, GitHub to share the code and, of course, Android Studio to develop the app. We even threw in some Kotlin coding as well. Unfortunately, the BluetoothTap SDK wasn’t compatible with the TC8000, so we had to skip that idea and went for item pick-ups using NFC instead. TC8000 API’s and Firebase were not that difficult to use.

And the winner is….

It turned out to be pretty awesome. The crowd and judges were really excited about our idea, features and the end result: a working demo! Zebra named us the winners of the hackathon and wearing a big smile on our faces, we gladly accepted the VR headsets.

Little did we know that this only had been phase 1. Six months after the hackathon, we discussed our successful participation with the – at that time –  new marketing manager, Leoni Meijer. Immediately impressed by the result of the hackathon, she felt that this was something that we should get out into the world. After a brainstorm session, the idea raised to further develop the app and to set up a marketing campaign, involving an awesome movie. And that is how the story continues.

From concept to launch

The next step was to further develop the app so we could truly launch it. The app still looked like a prototype, which it basically also was at that time. To make it a real app, we involved our interaction designer, Ward Smeets, who helped us create a badass app design. From a technical point of view, we still had to tweak some app features, like being able to end the game, selecting your avatar and showing the death state. The app was now ready to be played at the TC8000 scanner.

Tuesday morning, and we are ready to make our big entrance as movie actors. Together with the movie production company Studio Mooierder and a crew of 8 people, we headed off to an indoor laser tag and airsoft hall to shoot the movie. This awesomely decorated playfield provides an immediately first shooter game vibe. We had all ingredients to shoot a cool movie: the playfield, lighting, dramatic smoke machines, a 4K camera, and of course, the best actors anyone could wish for.

Wearing our “SWAT” uniform (and feeling pretty damn cool), we couldn’t wait to get things started. Zebra had provided us all the needed equipment for shooting the movie: holsters, hand straps, scanners, and a rack to install the scanners. We were só ready to do this. But first things first: everyone into makeup for getting that flawless Hollywood skin colour. A day full of shooting, running and jumping around, shooting at my colleagues with the scanner, having a lot of fun, and even holding the “aaaand cut” sign bord, resulted in the laser tag movie.

Zebra experience centre in the UK

Time to fly over to the Zebra Experience Center in the UK. Together with Leoni Meijer (Marketing Manager), I went to meet our contacts at Zebra and to show them the improved app and the movie. They had recently opened their Experience Center, which was a nice way for us to explore Zebra’s portfolio in real-life environments settings.

Meeting our contacts at Zebra was a great experience, big thanks to Hannah Moule, Adam Holden-Milner and Mark Jolley for having us. As not everyone had seen the app before, our visit turned into a real scanning / shooting festivity. There could not have been a more perfect reaction to our hard work of the past weeks. Fingers crossed that the laser tag app will have a similar effect on people who download it from the Zebra AppGallery.

When our Hackathon team developed the Laser Tag App, we could not have imagined an actual launch of the app, involving a big supportive marketing campaign.  I am looking forward to showing the laser tag app at different events, both Zebra events and external events.  Also for this year, we will be attending the Droidcon UK in London and, of course, joining the hackathon as well. The pressure is on to even top last year. Though, right now, this seems to be a “mission impossible”!